The first thing I would do if I was using this easy-to-use distribution would be to fire up an internet browser, mainly Firefox. Puppy Linux doesn’t come preinstalled with any internet browsers but when you click the “browse” icon it gives you the option to install one of five browsers. Of course, you have to be connected to the internet to download one. (Figure 4)

Once it was installed, it launched the default Lucid Puppy page and I was able to surf the internet easily. (Figure 5) 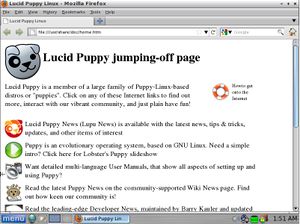 We also tested the pre-installed image editor mtPaint and easily managed to create a drawing dedicated to our new favourite Linux distribution (Figure 6):

Of course, another essential application to test is one of the pre-installed games called XInvaders 3D which is basically a 3D version of the old arcade game invaders. Hiscore of 10,000 (Figure 7):

Finally, there was one large bug that came with Puppy Linux. The cursor gets out of sync between the Virtual OS and Windows. It’s not clear if it’s because the OS is loaded in a Virtual Environment and if it was installed directly onto the machine this would not occur, further testing would need to be done (Figure 8):