The Linux distribution I chose is CrunchBang which is commonly referred to as '#!'. CrunchBang is "designed to offer a modern, full-featured GNU/Linux system without sacrificing performance."<ref name="About CrunchBang">About Crunchbang Linux. (2011, Feb. 18). Retrieved October 14, 2011 from http://crunchbanglinux.org/wiki/about</ref> It does not appear to be targeted at any particular audience.

The latest release of CrunchBang, called CrunchBang 10 "Statler" R20110207, is available in 32-bit and 64-bit versions with either the Openbox window manager or the Xfce4 window manager. They are available for download as torrents from the CrunchBang downloads page. The installation CD images are between 640-690MB in size, while a fresh installation of 64-bit CrunchBang took about 1.7 GB of hard disk space.

I performed both installations from VirtualBox, giving both systems identical hardware (16 GB hard disks, 512 MB of memory). Aside from the obvious difference in appearance between the two installation methods, there was no difference in the installation. Both asked for: 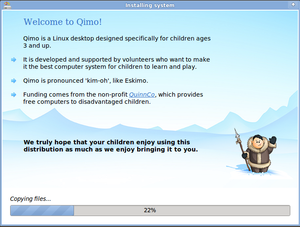 The time taken for both installation methods was roughly 10 minutes.