CAINE, which stands for Computer Aided INvestigative Environment, is a Linux environment whose main purpose is to provide specific investigative and reporting tools that would prove useful to a forensic scientists.<ref name = "CAINE">CAINE-Live Website (Last accessed October 19, 2011).</ref> This Linux environment was originally created in Italy and is currently being managed by Mr. Nanni Bassetti (Website in Italian).

Something to consider before diving into what CAINE is used for is to get a quick understanding about the four step process model put in place by the U.S Department of Justice with regards to digital forensics.<ref name = "DigiForen">Digital Forensics - The Enhanced Digital Investigation Process Model (Last accessed October 14th, 2011).</ref>

The design goals that CAINE strives to achieve are as follows:<ref name = "CAINE"/>

Obtaining CAINE is quite simple. The main website hosts the under 700MB .ISO file directly. The direct download link to CAINE can be found here. There is also an 865MB file that is available for netbooks as well. It can be found here.

Upon starting up CAINE for the very first time. Something to note is that the installation doesn't actually start upon first boot-up. Since CAINE's .ISO file is a Live CD, it has the full operating system with pre-configured software and settings<ref name = "LiveCD">The Magic of Live CDs (Last accessed October 17th, 2011).</ref>. For the sake of seeing how the installation process works, though, I will go through and ensure that CAINE is actually installed the HDD.

The software that was used to virtualize CAINE was VMWare Workstation, specifically version 7.1.4 build-385536. [Figure 1] 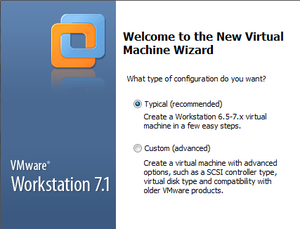 The specifications of the virtual machine are as follows:

CAINE booted up with no initial problems with a boot screen full of options. [Figure 2] 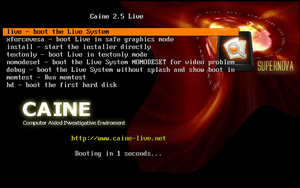 After either selecting the Live Boot or waiting for 10 seconds, the desktop will be displayed. [Figure 3] 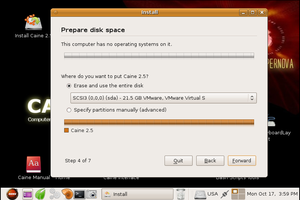 Figure 4 A look at one of the installation steps. Note the time is now correct.

Note: All choices made in the test install will be written in parantheses.

After clicking on the Install CAINE 2.5 icon, the user is given the option of selecting a language (English). The installation then initializes the clock to some server's clock, and asks for the user to select the time zone by region (Canada) and Time Zone (Canada Toronto). Afterwards, the user is prompted to selected a keyboard, with the suggested option being USA (USA). Next, the user is prompted to specify a partition in which to install Caine 2.5 on (Erase and use the entire disk) [Figure 4]. The user is then prompted to enter their name, username, password, and the name of the computer. Once this is complete, the user is shown a review of all the choices they have made with a final message stating that all these choices will be applied to the disk upon clicking "Install".

The CAINE operating system will now begin installing to the HDD. Once the installation is complete, the user will be prompted to either restart or continue with manual configurations. Now the virtual machine can be properly restarted without needing to force quit the virtual machine. Upon restarting, the user is asked to choose either the operating system, or the memory diagnostics tool. Something to note is that the operating system that is available isn't called "CAINE", it says "Ubuntu, with Linux 2.6.32-33-generic". This most likely comes from the fact that CAINE was born from Ubuntu and most likely shares a lot of its kernal. 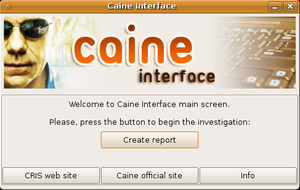 (Being a beginner when it comes to all forms of forensics, whether field, digital, or documentation, I will do my best to give an appropriate overview of CAINE.)

Since CAINE was intended specifically for people who work in the digital forensics field, I started looking around the OS for some of the software the developer said could help in all stages of digital forensics. Luckily, right on the desktop was something called "Caine Interface" which seemed to be the hub that linked to all things that have to do with CAINE. [Figure 5]

Upon clicking on it, I was greeted with a slick looking message box that allowed me to create a report. After clicking on it, I was prompted to enter the name of the case and the name of the lead investigator. Afterwards, a handful of tabs popped up with many different programs available. The main types seemed to be disk image file creating and testing to ensure nothing's been corrupted, and different methods of analyzing said image.

One of the programs I tried was AIR, which stands for Automated Image & Recovery. This program is used to create forensic disk images as well as recover them<ref name = "AIR">Automated Image and Restore (Last accessed October 18th, 2011)</ref>. Since CAINE runs on a Live-CD, the ability to create a forensic disk image quickly of a computer that is in the possession of investigators would be quite useful. 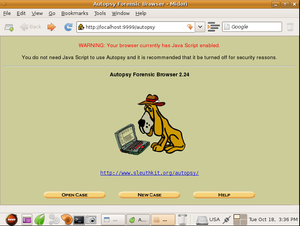 Figure 6 The start of the Autopsy software.

After looking at AIR, I clicked on the tab that led to a lot of different analysis tools. One of the more interesting ones was software called Stegdetect. According to the program itself, its purpose is to search through a folder containing .JPG files to determine if there are any stenographic (secret) content to the image, whether it be a hidden image, data that is secretly attached to the picture, a hidden message (etc).

The main GUI for digital forensics analysis was the Autopsy program. It is useful if the investigators have an image file of an entire disk or partition of a computer that they wish to search through.

The "Autopsy 2.24" icon opened a program that first, launched in a command window which afterwards automatically opened a browser window with the program ready to be used. This software allows for a user to create a new case or open a previously created one. [Figure 6] Upon creating a new case, the software asks for the case name, a short description, and a list of all the investigators that are assigned to this case. Once this has all been filled out, the program then asks for a host to be created. This host is the computer that is currently under investigation. The program then asks for the name of the host computer and a short description. Also, optionally, it asks for a specified timezone, timeskew adjustment (to compensate for how much or little the computer is off from another computer's time), and a hashtable for known good and bad files. Once this is complete, the program asks for an image file, which is interpreted as a filepath. Then it asks if this file path points to a disk or partition, and then finally how to extract the files, either by moving, copying, or simply linking to them.

At this point, I did not have an image file on hand to investigate, so I could not delve further into this program, but from reading through the provided help manual I was able to determine that once an image file has been loaded in, there are some commands that can be used to search for keywords inside the files themselves.

CAINE, I believe, being targeted to people in the digital forensic profession makes a very good case for being a viable solution for digital forensics. An easy install coupled with the option of using the Live-CD desktop gives the user enough options depending on the situation. As I said earlier, the Live-CD would be a great option if they needed to quickly make an image file of a computer that may be partaking in illegal activity.

The choice of having all relevant software in one convenient place was a professional choice. This allows people who may not be too familiar with Linux, or even computers to quickly get access to the software they need to do their job.

In closing, I would recommend CAINE to any forensic scientist who wants a portable, easy-to-use operating system with some great software to help them do their job.

As mentioned above, CAINE Linux is designed to meet the needs of digital forensic scientists. This goal is mostly met by the software that is provided with CAINE. Before devling into the package structure, taking a quick look at the initial forensic software given with this OS is a good idea. As also spoken of beforehand, CAINE comes with a program called "CAINE Interface", which is simple little UI that contains all of the forensic software that is given to the user via this distribution. With the most important software all packaged together in this intuitive interface, it shows CAINE's dedicated to showing users that it comes as advertised. 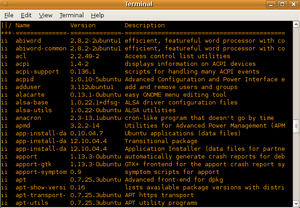 Figure 7 A look at some of the installed packages using dpkg. 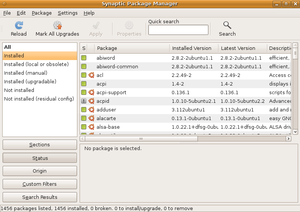 Figure 8 A look at some of the installed packages using Synaptic Package Manager.

CAINE also uses the package manager dpkg, which is a package manager originally created for use in the Debian Linux OS. It deals with .deb package files. Dpkg is a terminal launched utility that is used to install, remove, or provide the user with information about packages.<ref name = "Dpkg">Wikipedia Entry for Dpkg (Last accessed November 12th, 2011)</ref> After some searching, it was found that there is another package manager that comes with CAINE, Synaptic Package Manager. This utility is a graphical UI that seems a lot more user friendly than its counterpart, dpkg. Provided below will be both ways to achieve a packaging goal, whether with dpkg, or with Synaptic Package Manager.

To get a list of packages installed on CAINE using dpkg, all the user needs to do is open a terminal and type "dpkg --list". This will provide the user with the entire alphabetical list of installed packages, their version number, and a short description of each package. In order to actually see all of the packages, when using the "--list" command, ensure that in the terminal options, the scrollback is either set to a large number or to unlimited, because, at least in CAINE, there are a lot of packages to be displayed. [Figure 7] If the user prefers a graphical interface, simply open Synaptic Package Manager (ensuring that the user has administrative access), and check the box on the left of the window that says "Installed". [Figure 8]

Using dpkg, the user must move the directory with the package their either want to install or remove using the terminal, and type in either "dpkg --install <package-name>.deb" or "dpkg --remove <package-name>.deb" respectively. This is pretty self-explanatory for removing packages, but for adding them, the user must manually provide them from some external means if they wish to install a new package.

On the contrary, using Synaptic Package Manager makes this process a lot easier. To add new packages, the user can simply check the box "Not installed" and be given a list of packages they don't have installed on their computer. After selecting one or more packages, click the apply button at the top to proceed to automatically download and install the selected packages. Removing packages is also quite simple. Check the "Installed" button, then right click on the package that will be removed and select "Mark for removal". Just the same as adding, click the apply button and the program will proceed to remove the selected packages.

Using Synaptic Package Manager, over 30,711 packages were found, and 1456 were already installed. According to this comparison, Ubuntu has the most available packages out of any distribution by a fair margin. The number given was 37,000.<ref name = "Comparison">Comparison of Linux Distributions (Last accessed November 12th, 2011)</ref> After looking at a lot of different distributions, it seems that CAINE Linux has a very large amount of packages available to it. This could be because it was created from Ubuntu, originally, and therefore a lot of packages made for Ubuntu are compatible with CAINE.

Here is a list of some of the major packages, their version numbers in comparison to the most stable release, as well as other relevant info.